500 is a popular bid and trick taking card game originating from the USA played by four players in teams of two, with partners sitting opposite each other. It is especially popular in Australia and New Zealand. The game is called 500 because the objective of the game is to be the first team to reach 500 points.
Download APK
0/5 No votes
Report
Developer
A R C RoweUpdated
December 11, 2018Size
Varies with deviceVersion
3.04Requirements
4.4 and upGet it on
au.tonyrowe.fivehundred 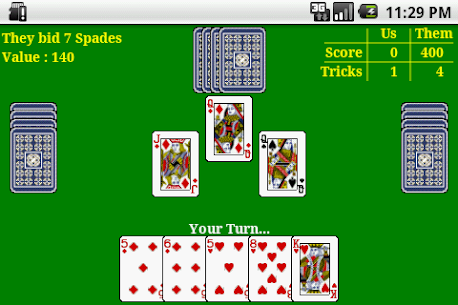 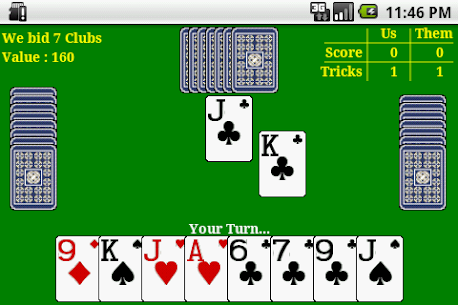 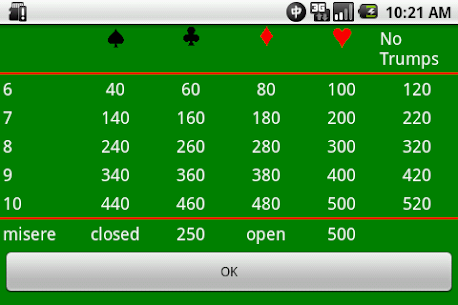 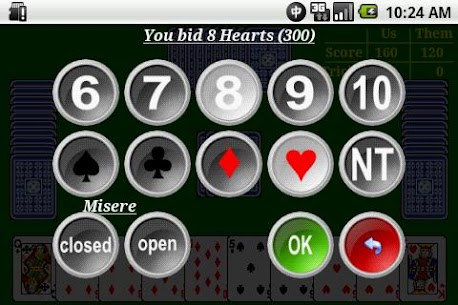 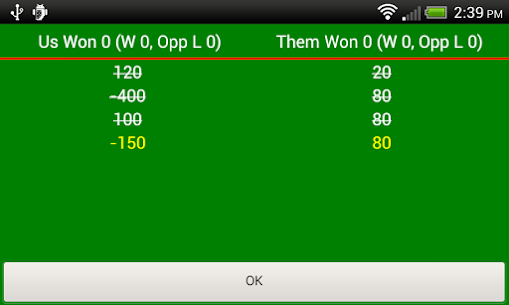 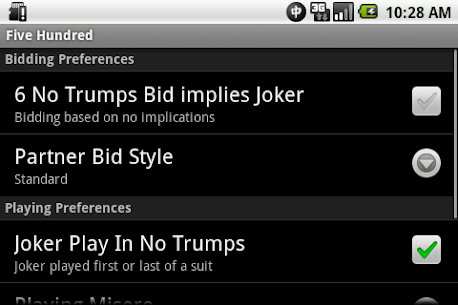 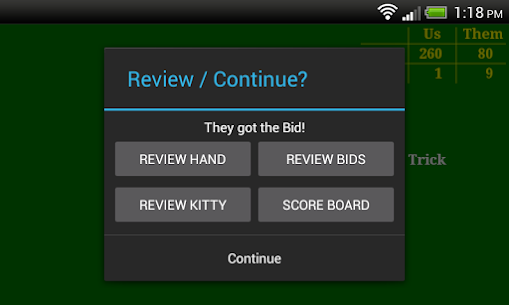 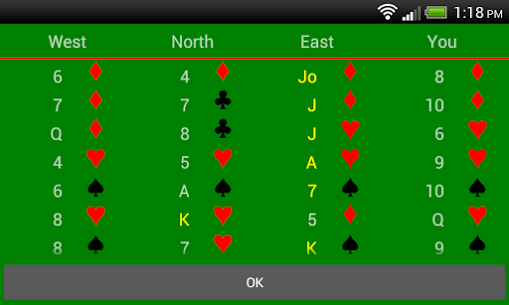 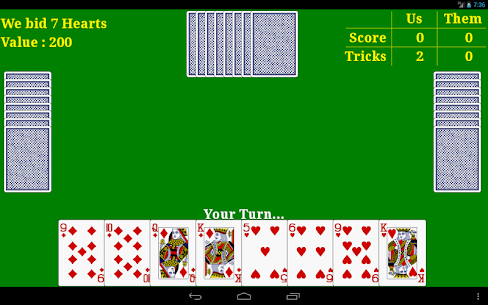 500 is a popular bid and trick taking card game originating from the USA played by four players in teams of two, with partners sitting opposite each other. It is especially popular in Australia and New Zealand. The game is called 500 because the objective of the game is to be the first team to reach 500 points.

Player bid on how many tricks they can take based upon the hand dealt to them and the highest bid gets the chance to win the hand and the points.

In this version you have a computer partner playing against two computer opponents. The characteristics of your partner can be configured to suit your style of play. Your partner can be an aggressive bidder, moderate or conservative, as your desire.

Here are some tips on playing the game…

– Don’t forget that when there is a trump suit, the highest trump is the joker , followed by the jack of the trump suit (right bower), the other jack of the same colour (left bower), then Ace, King, Queen, 10, 9, etc. down to 5 or 4.Therefore, if say, hearts are trumps, then the jack of diamonds in considered to be a heart for that hand. If diamonds are trumps, the jack of hearts becomes a diamond, conversely. This does not apply for a No Trumps or Misere Bid, naturally.

– The minimum number of tricks that can be bid is six. If you bid say “six hearts”, you are saying that with your partner’s help, you will try to win at least six tricks with hearts as trumps. How many hearts say would you need to feel confident of making a six hearts bid? There are plenty of thoughts about the bidding process available online, and you need to take the strength of your offsuit into account, ie. do you have many aces?, but as a general guide, perhaps 4 hearts would be a good start.

– If you win the bid, you get to pick up kitty, and need to discard any 3 (or 5) cards from the 13 available to you. As a guide, it is often a good idea to try to rid yourself of an offsuit of which you have no high cards, so that if that suit is led by the opposition during the hand, you are in a position to trump them if required.

– During play, if you are trying to make a bid, it is often a good idea to try to extract trumps from the opposition early in the hand, so that when it comes to playing your offsuit later, they are not in a position to trump your aces. But if you are trying to stop a bid being made, it is also a good idea to not lead trumps back to the opposition if you can help it, try to keep the precious trumps for trumping offsuit.

– When you can’t follow the suit that was led, are you aren’t looking to trump, you are said to be discarding. You should try to discard a low card from your strongest offsuit first, and your partner will pick up on this and believe that this suit is perhaps the best to lead to you later.

For many more tips on all things 500, a good website to visit is

To play 500 online against other people, try…

If you have any issues, please email
trowe67@gmail.com
and an update may be supplied.

Note to Samsung users who can’t seem to access any menus, that these can be accessed by long pressing the bottom right “recent apps” button on the device.