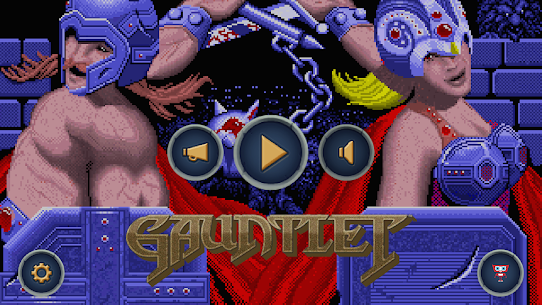 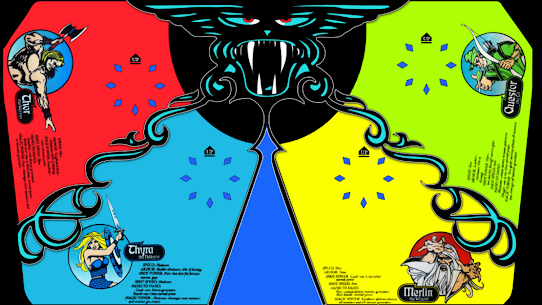 Gauntlet is a fantasy-themed hack and slash dungeon type game originally released in 1985.

Bring back a little bit of the 1980’s nostalgia gaming with this “Gauntlet Clone”, hack and slash your way though 27+ Arcade Levels, 13+ Custom Levels(user generate maps and the developers) and finally 94+ ZXSpectrum levels of warrant mayhem and destruction.

Take the lead of one of the main characters Warrior (Thor), Valkyrie (Thyra), Wizard (Merlin) or Elf (Questor) and pick your wits against ghosts, grunts, demons and others, it’s your turn to remember what gaming was all about in that classic time period of 1985.

Now you can play three types of maps independently of each other Arcade (based on the arcde machine), Custom (users or developer has created), ZXSpecturm(based on the 48K spectrum, but with graphics up to date).

I’ve even added the facility to make your own maps using a custom Map Editor. Press the flashing button, and download the editor, get a little fame when others play your level(s) you have created, With a level name “Please provide one”, your developer name, and a description if you want, just create them and send the maps to use, it’s all in the download provided.

The game will work on phone’s and tablet’s, but the bigger device screen you can use it will make it easier to move as an 8 way directional virtual joystick is quite sensitive on smaller devices( <6 inch), this has been run and continually gets run on the following devices Samsung Tab S 10.5, Samsung 10.1(2012), Nexus 9, Nexus 7(2013), Nexus 6, HTC Desire 610, if it does happen to freeze lift your finger should reset it.

Be aware that the controls work like the original (I cannot emphasis this enough), you cannot move and fire at the same time, if you want this feature, go to the main settings and change Classic to Modern (as requested by users).

If you are having trouble moving on your device with the default joystick, change to the touchpad in the main window.

Every few weeks I release new content this may or may not be re-balancing of the game in some way( hero/monsters) and new maps.

In version 1.4+, ads have been added so you can easily get health(optional at the start of a level), to save on your data tariff these ads are not pre-initialised (e.g. pre-downloaded), so it will take longer to start them just so you are aware.

have fun and keep playing.