A gunship battle game where the warship is on and you have to target the gangsters and terrorists around the world!
0/5 No votes
Report
Developer
Action 360 GamesVersion
1.1.3
Updated
November 13, 2017Requirements
2.3 and up
Size
42MGet it on 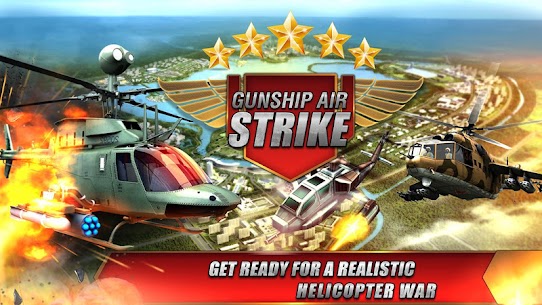 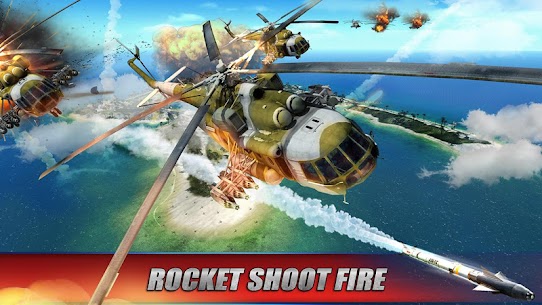 A gunship battle game where the warship is on and you have to target the gangsters and terrorists around the world!

Its high time and you have to fly the fighter plane to end the war between the terrorists.

The ultimate airship in the helicopter game has the devastating specs and can fire the missiles with the super autotarget feature!

The efficient helicopter has the realistic shooting and iron force. So begin the warship battle in the free action games and start flying the fighter plane to attack the dangerous terrorists and gangster’s secret hubs.

Fly to different islands around the world and kill the terrorists, destruct their tanks and camps with the airforce games powerful combat helicopter. Finish the enemy with the wings of fire and start the air strike in the battlefield with the warship.

Gunship Air Strike Combat Mission is a gunship game in the battlefield where you have auto-targeted missiles which hit the target where ever it moves. The iron force of the helicopter is strong enough to end the hordes of the enemies and destruct their camps with multiple bullets.

• 3D visuals and Graphics in the free action games.
• Enjoy the exhilarating levels in the action game.
• A variety of warship helicopters with multiple new weapons for the air strike.
• A game full of adventures with the gunship strike.
• Many islands to be discovered with dangerous terrorist’s locus in the battle app.
• A thrilling and hard to play gunship game.
• Shot as many bullets and missiles as you want and destroy the military bases of the
enemy.
• A variety of missiles and bullets with many other features in the fighter plane.
• Health and time bonuses in the game.
• Auto target feature in the missiles that hits the target wherever it is!
• Option to continue the level from where you lost the gunship battle.
• An amazing acceleration feature which is sensitive to your device’s movements.

• Begin the game with selecting the levels of the gunship game.
• Select your favorite battle ship helicopter and begin the battle!
• Check your game target and achieve it to earn points and coins.
• Hit the enemy military bases with missiles and bullets.
• Relode the bullets when finished.
• Lock the target and hit the missile to finish it
• Be careful with the enemy’s air strike.
• Destroy the tanks, camps and kill the terrorists according to the target assigned.
• The levels get difficult as you reach high. So, BEWARE!
• Control the Gunship with the joystick and shooting buttons.
• Be careful from the missiles as they affect you and your enemy more than bullets.
• Complete the game target and unlock new exciting levels!

Gunship Air Strike Combat Mission is an adventure game and free action games where you have to be careful about your health bar and time both as you will lose the game if youll get shot by the enemies in the warship battle.

This helicopter game is the top game 3D in the world of action games and helicopter games where the warship battle is deadly and the terrorists shoot missiles and bullets with the riffles, machines guns at the wings of fire. But you have to fight back with your fighter plane.

Make sure to hit the targets you are given in the gunship game 3D to earn higher scores within the given time. You may lose the helicopter game if the fighter plane health or time ends. Hit the target with the missiles to get a greater impact of the iron force and win the airforce games!

Destroy the military bases and camps of the terrorists and enemy in your warrior gunship air strike and win the deadly battle!